A message from the ZAD (“Zone à defendre,” the site of the proposed airport) sent on the 20 October about the resistance to the evictions and the reoccupation demo.

On the evictions and current resistance

The ZAD was invaded, and three-eighths occupied by hundreds of police of all kinds last Tuesday morning (16/10/2012). Little by little, they attacked the occupied houses and huts, destroying them, and scrupulously removing all of the debris from the zone in order that nothing that might serve the resistance or reconstruction be left behind.

The sites and fields still occupied are regularly harassed, sprayed with tear gas, and trampled. The police are trying to prevent any meeting or demonstration. Since Tuesday, the occupiers and those who have come to support them have countered with barricades, roadblocks on the roads used by the cops, by reoccupations, projectiles, fires, insults and sarcasm… It has now been 4 days, in constant rain, that a few hundred people have now held the zone, at all costs, against the police, and they have every intention of staying. Demonstrations and actions have taken place every evening in Nantes and other cities, and it is not over yet.

Seven houses have already been evicted, as well as some huts, but there are several others that remain, scattered throughout the woods and fields, and in the trees. Apart from the occupiers, the tenants, owners and farmers continue to be threatened. They are also being forced to leave the ZAD. In other words, this supersized eviction attempt is now well under way. We cannot at this moment predict how the evictions are going to go. They may or may not be continuous, affecting the other huts and inhabitants in the next few days. But it seems certain that the military occupation of the zone and the demolition of the houses that have been evicted will continue next week. “Le Sabot” (the cultivable land occupied following the demo of the 7 May 2010) has resisted all the police harassment of the last week, but it is possible that the Prefecture will seek to force them to leave in the next week. At “Fosses noires” a house that was evicted on Friday evening, then reoccupied a few hours later, is threatened within the next 48 hours. The tree huts and other aerial installations remain occupied and may increase in number.

It is highly likely however that a second grand offensive will take place after the 28 October, because 3 houses will be newly evictable, including “les Rosiers,” the first occupied building in the ZAD, which has now been occupied for 5 years. Be that as it may, we need reinforcement and relief and creativity in the coming days and weeks, both here, to reconstruct and continue the occupation, as well as action elsewhere to keep up the pressure.

As the struggle intensifies, and especially if there are arrests, everything possible must be done to ensure that the occupiers do not find themselves isolated. (follow zad.nadir.org to get ideas for action, meeting points, up-to-date info on the situation on the ground, and advice about what to bring)

Kudos and profound thanks to everyone who has already taken action in solidarity, demonstrated, whether that be 3 people or 2000, sent messages of support, brought food and supplies, socks, and other things required for the struggle… It warms our hearts, and feet, and bolsters morale, on these rainy days of resistance, to know that others are targeting the Socialist Party, Vinci, and their cronies, builders of the airport, and destroyers of our lives.

With respect to the reoccupation demo, already planned should evictions take place (see the announcement), we still see the necessity for an event with wide, constructive and aggressive mobilisation following this first round of evictions. It is is still worth saying that we, the occupiers, locals and incomers, farmers and activists, have yet to lose anything in this struggle: we will always return, and we will not allow this airport to be built. Together we must construct an open place to organise the struggle for the threatened land. Our actions increasingly call this project into question, keep it in everyone’s minds.

The reoccupation demo will therefore be well received!

We had announced that it would take place on the fourth Saturday following the first significant evictions from the zone. However, though this first wave of evictions has well and truly started in the last four days, it has not seen any respite and we have had hardly had a chance to draw breath. Because of this, we have decided that it will be necessary for us to take a step back from the situation before confirming a date.

We therefore call for a meeting to organise this reoccupation demonstration of on Friday 26 October at 1900h at B17, 17 rue Paul Bellamy in Nantes. All groups, associations and individuals who wish to take part are welcome. The date of the demonstration will be confirmed following this meeting. We invite you to to pass the message as widely and rapidly as possible, so that everyone is able to arrange to come. We call on all of the collectives who support the reoccupation to begin to mobilise and to organise on the issue. As we wait we are already looking for communal kitchens, marquees, musicians, batukudas, hut kits, materials, tools, tractors… with a view to reoccupying.

The occupiers of the ZAD and supporting collectives, who cede nothing 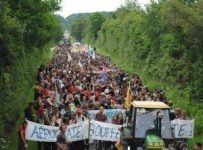