Shell started construction work on its highly controversial Corrib on-shore gas pipeline on 29 March, with a judicial review of the pipeline still outstanding and choosing the day that local Rossport activist Maura Harrington was due in court. 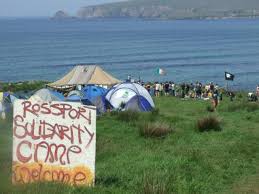 The work was immediately resisted by people standing in front of and sitting on top of trucks, a lock-on by the compound gates and another blockade, all of which were dealt with violently by the gardai, causing some injuries. A security vehicle belonging to security firm IRM-S became another blockade when someone locked on underneath it all night, preventing work starting the following morning. (The murky world of IRM-S is exposed in the film The Pipe).

The following week’s actions included removal of whole sections of Shell’s ‘bogmat’ roadway and an 11 hour lock-on at the compound gate, preventing any vehicles from entering or leaving. As the lock-on was removed, more people moved in, extending the blockade. A further blockade the following day saw a Shell to Sea campaigner punched in the stomach by a garda (MY259).

Meanwhile, the gardai have helpfully provided incriminating evidence about their activities and attitudes on an activist’s video camera which they seized and left running before returning to its owner. The recording included gardai joking about threatening to rape activists, as well as arguing about whether or not they should bother to follow safety procedures when removing activists sitting on top of vehicles.

On Thursday 20th January An Bord Pleanala announced their decision to approve the Shell high pressure raw gas pipeline. This is the last chance to resist the plan by the Irish Government, state bodies and Shell to force their will on communities and on the country as a whole, regardless of proper process, economic sense, people’s safety, environmental laws and human rights. The struggle against Shell is a struggle for everyone in Ireland and the world. You can be part of it.

Since late 2000 there has been an on-going attempt by multinationals and the Irish state to devastate a remote coastal area of county Mayo with a toxic refinery and a high pressure production gas pipeline. Since then there has been an ongoing struggle to keep Shell out of Mayo. Pickets, blockades, benefit gigs, demonstrations and speaking tours have been happening all over Ireland, the UK and beyond.

What are Shell’s plans?

The construction period is 28 months, probably starting around March 2011. Month 3 and 4 are the heaviest for construction traffic with 250 truck movements every day. However Shell could begin construction anytime from now by putting up fences to secure the compound in Aughoose and Glengad. The opportunity to prevent Shell from securing the Aughoose compound and delivering their tunnel boring machine to the site is now our best chance to stop the project. We must not let the opportunity go by, as once the tunnel boring machine has gone underground the work will be much harder to stop. We have until Thursday 17th March to put in an application for a Judicial Review. Even if this is successful it would not stop work immediately and so we need to stop it ourselves.

What you can do now

1. Come up to the camp! If you can only come up once this year, make plans to come up soon. Ideally come as soon as you get the call out that Shell are about to start work which will probably be within the next 2 months. Summer is the time loads of people come to resist Shell’s destructive work but this time Shell are planning to start work around March and this is the busiest time for traffic movements. If you are booking time off work, book time off in March now, there will be work to do every day in March. Ask your friends and all those you know have been involved in the campaign over the years to book time off also and make plans to come up.

2. We are getting ready to set up the new camp and need your help now, particularly with practical preparation and building work. The new camp requires people with carpentry and building skills. However if you don’t have these skills, please come because you can learn them.

3. Do a stall and leaflet your local town on Saturday 12th February. The Pipe film will be shown on television on Wednesday 9th February so lots of people will be interested in the campaign. We will have the new leaflet, stickers and posters and election questions ready for this, please email to be sent some.

4. Get in touch if you would like us to give a non-violent direct action workshop in your area, to prepare people to come up.

5. If you cannot make it up here at the moment, please get ready to come when you get the call out that Shell are about to start work. Solidarity actions at garages, government offices & subcontractors are other great ways of supporting the campaign, however immediately after the call out we will need you here in Mayo.

Please email rossportsolidaritycamp@gmail.com or phone 08511 41170 to let us know when you can come up and for latest updates.

Please share this information as widely as you can.

If you have ever wanted to take action, the time is now!