Since the year 2000, the mining corporation Rosia Montana Gold Corporation (RMGC) has been trying to construct a surface gold mine in the mountains of Transylvania. And subsequently since 2000, they have been prevented from fulfilling these plans by the extensive resistance of the local population and of many Romanian movements that have joined the cause in an act of solidarity. Through this resistance, a sure to come ecological and social catastrophe has been prevented. In September 2011, Reclaim the Fields (RtF) organized a camp of solidarity that took place in Rosia Montana, and involved multiple direct actions and protests in the village.  During this time, it was also decided to continue protesting all around Europe. The destruction of lives and ecosystems for the sole purpose of economic gain, be it gold, biofuel or other goods, is a global phenomenon. When different local struggles link together, it is easier to recognize global problems and together find the solutions to combat them. This is the principle that is expressed through solidarity by the “Save Rosia Montana” campaign of the RtF.

A big lake full of cyanide is all that will remain

The mining corporation RMGC, which is 80% controlled by the Canadian company Gabriel Resources, was founded specially for this mining project. They intend to mine on an area of 2,388 hectors about 314 tons of gold and 1,480 tons of silver. The company plans to remove four mountains, shift massive amounts of ore and leach highly poisonous cyanide, all for the purpose of extracting these precious metals. The nearby Corna Valley will be filled with about 250 million tons of toxic waste, more precisely cyanide slag, from the mine if and when the deemed necessary 185 meter high dam is built. Twelve years earlier, in the Romanian Baia Mare, a similar dam broke, causing the biggest European environmental catastrophe since Tschernobyl. The contamination of drinking water affected more than 2.5 million people and because of the death of around 1,400 tons of fish, hundreds of fisher on the Theis in Hungary lost their livelihood. Following this disaster, the European Parliament ruled in the year 2010 to ban the use of cyanide, but for certain reasons this has been ignored by the European Commission.

The mining project has divided the inhabitants of Rosia Montana into two opposing sides. While some are standing up for the preservation of their village and the surrounding nature, others have backed down due to psychological pressure and the promise of employment and compensation. The relocation plans that are propagated by the RMCC are currently in full speed, with the goal of resettling 740 farm and 140 homes. Eugen David, a farmer and president of the NGO Alburnus Maior, comments: “If necessary, the people will consent to relocation, but my cows will certainly not! We will stay here and defy the gold mines!”

Unfortunately, RMGC and the Romanian government have devised strategies to overcome these “minor” setbacks. An alteration of the mining law is currently being discussed and would allow private companies to arbitrarily expropriate the land belonging to the local population, a right that was previously held only by the Romanian government. Due to these new and disturbing developments, recent protests have targeted the planned amendment by symbolically expropriating important buildings.

Expressing Solidarity with “Save Rosia Montana”

After the camp in Rosia Montana, a local RtF group was established in Vienna, Austria. Together with Alburnus Maior, they initiated a transnational day of action for the 1st of December, coinciding with the Romanian National Day. Letters condemning the alteration of the mining law and demanding the immediate halt of the mining plans were delivered to Romanian embassies in multiple European countries. Symbolic expropriation and informational presentations were organized in some cities, as well as radio broadcasts and news reports. Altogether, people from Moldavia, Hungary, France, Portugal, Germany, Luxembourg, and presumably other countries took part. Multiple initiatives and protests also occurred in Romania.

Not only did the Romanian Embassy in Vienna get branded with an expropriation badge, but also the Parliament, the National Bank, the EU-House and the office of the Austrian ex-chancellor Alfred Gusenbauer (Gusenbauer has been on the board of directors for the Canadian corporation Gabriel Resources since 2010). After a successful protest in front of the Romanian Embassy, an informational presentation took place in the evening, where the Romanian activist Alina Banu was able to inform the participants about the history and development of the Romanian protests against the mine.

The mining plans are almost ready to be carried out. The ministry of environment will presumably issue an “Environmental Permit” by the end of January and the alteration of the mining law is also soon to be passed. Therefore, a call for further transnational actions of solidarity in January remains. The 6th of February also marks the “birthday” of Rosia Montana, an important day of resistance for the “Save Rosia Montana” campaign in Romania. 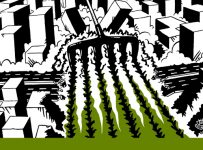 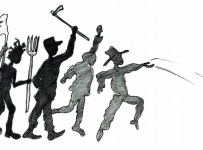 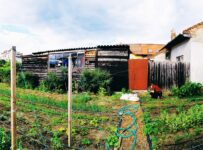